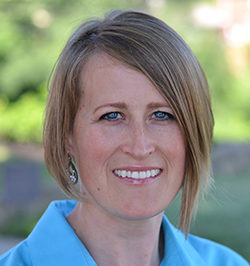 Abby Johnson is a longtime lover of classical education. She graduated in the first class of Whitefield Academy in Kansas City, MO, and went on to New St. Andrews, a Classical Christian Liberal Arts college in Moscow, ID. There she had the opportunity to learn under excellent classical professors including Douglas Wilson, Dr. Peter Leithart, Dr. John Schwandt, and Dr. Chris Schlect. She also had the opportunity to direct junior high theater for 2 years at Logos School in Moscow, ID. After graduating with a Bachelor of Arts in Liberal Arts and Culture, she married Mat Johnson and moved to Costa Rica, where they lived for 6 years and had two children, Eleanor and Elias. While there, she worked intermittently as an English tutor for second language students. Upon moving back to Kansas City in 2011, Abby began working at Whitefield Academy as a teacher of the Progymnasmata and Logic, and also as a music aide. Being a classical music enthusiast she sings in the semi-professional choir Te Deum. When not pondering or practicing the finer points of Aristotle or Bach, she enjoys getting out with her family on the bicycle trails in their community. Mr. Johnson teaches Classical Composition for Memoria Press Online Academy.