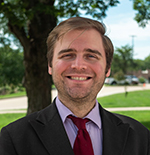 Jon Christianson is the Latin Director at Memoria Press and has taught Latin and classical studies at Highlands Latin School. In addition to overseeing the development of Latin curriculum and contributing to the edition of new and updated Latin volumes, he writes for the Classical Teacher magazine, takes part in video production both for Latin lessons and social media outreach, and teaches Latin with Memoria Press Online Academy. Within the classics, his chief areas of interest and study are the Latin language and Greek tragedy. He lives in Louisville with his wife Anna and his son Carl, with another on the way.